Growing up under the care of his grandmother in rural eastern Kenya, Dysmus Kisilu saw how hard farmers worked – and, often, how little they earned.

Even today, when the potato harvest comes in each year, a 90-kilogram sack sells for just 2,000 Kenyan shillings ($US18) in the local market, as supplies soar, he said.

Four months later, the same sack is worth three times as much – but small-scale farmers have already sold their crops, fearing rot if they try to hold onto them.

“Farmers have never been able to negotiate,” Kisilu said. “Buyers say the price is 2,000 and they have to say yes or the produce goes to waste.”

But the 29-year-old, who won a scholarship to study renewable energy at the University of California, Davis, has found a promising answer to that problem: cold storage units for off-grid rural areas, run on solar power.

Dysmus Kisilu and a user of his ‘Solar Freeze’ technology look at wiring for the cooler in Kenya. PICTURE: Ashden.

Kisilu’s climate-smart cooling technology also has been swiftly adopted to solve a new problem: keeping COVID-19 vaccines and other medicines chilled in remote areas beyond the power grid.

“It’s good to see how fast the people on the ground are willing to accept this technology once they try it,” he said in an interview on the sidelines of the COP26 UN climate talks in Glasgow.

The young Kenyan is one of the winners of this year’s Ashden Awards, which promote low-carbon innovations in sustainable energy and development. 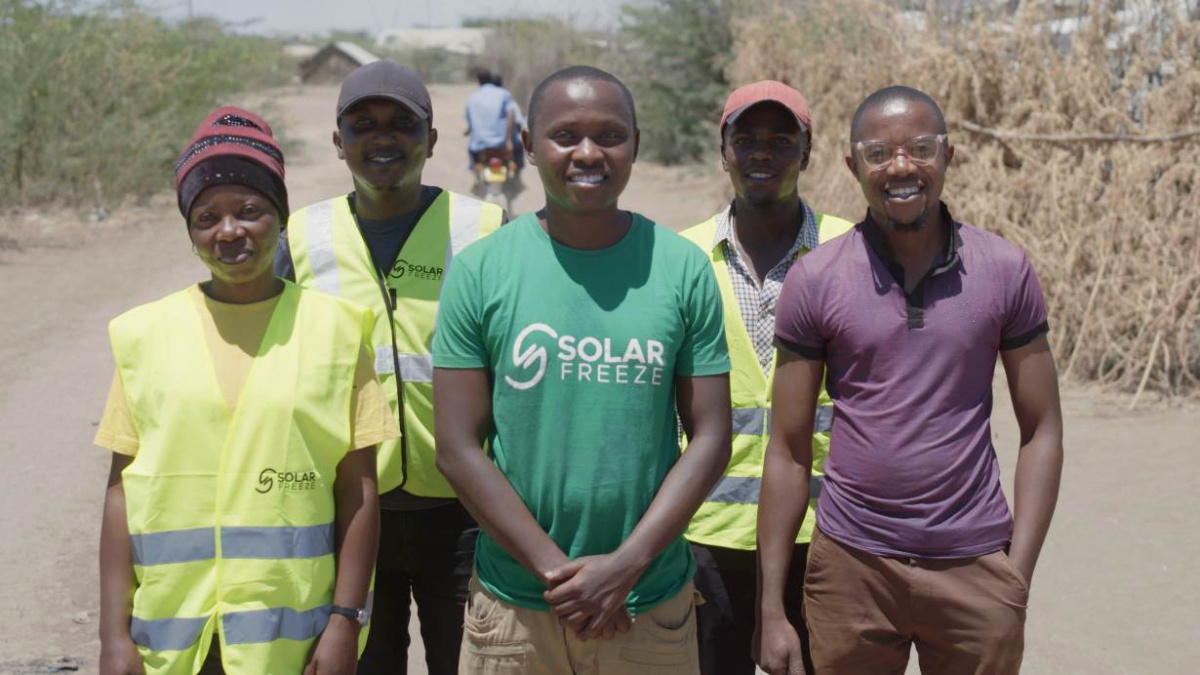 Dysmis Kisilu stands with some of the solar power workers trained through his “Each One Teach One” program in Kenya. PICTURE: Ashden

Kisilu’s innovation got its start as he studied renewable energy technologies during his university degree.

“I was very fascinated,” he said. “I thought these things were very practical back home – but there was just no link between the research and what was happening on the ground.”

So with fellow students pitching in and some initial funding from the university and the US Agency for International Development in 2019, he came up with a shipping-container-sized solar cooler with a battery backup to store perishable produce.

Working with Kenyan agricultural officials, he then set up trial coolers – capable of holding up to 400 crates of vegetables each – at markets and produce collection centres in Kenya, with daily charges starting at 20 Kenyan shillings (two US cents) per crate.

The initial reaction was underwhelming.

“The average age of farmers is 65 – and they’re a bit sceptical,” Kisilu noted. “Most farmers are not exposed to technology like cooling and irrigation. It was all very new for them and they thought it would be too expensive.”

The young businessman’s father, dubious about his well-educated son becoming a struggling entrepreneur rather than taking a steady job with a multinational firm, handed him the newspaper job ads.

“Sometimes I would even look,” Kisilu remembers.

But a second, freezer-chest-sized solar cooler he had also developed – intended for sale, rather than to provide cooling services for a charge – soon began to take off, particularly as the COVID-19 pandemic emerged. 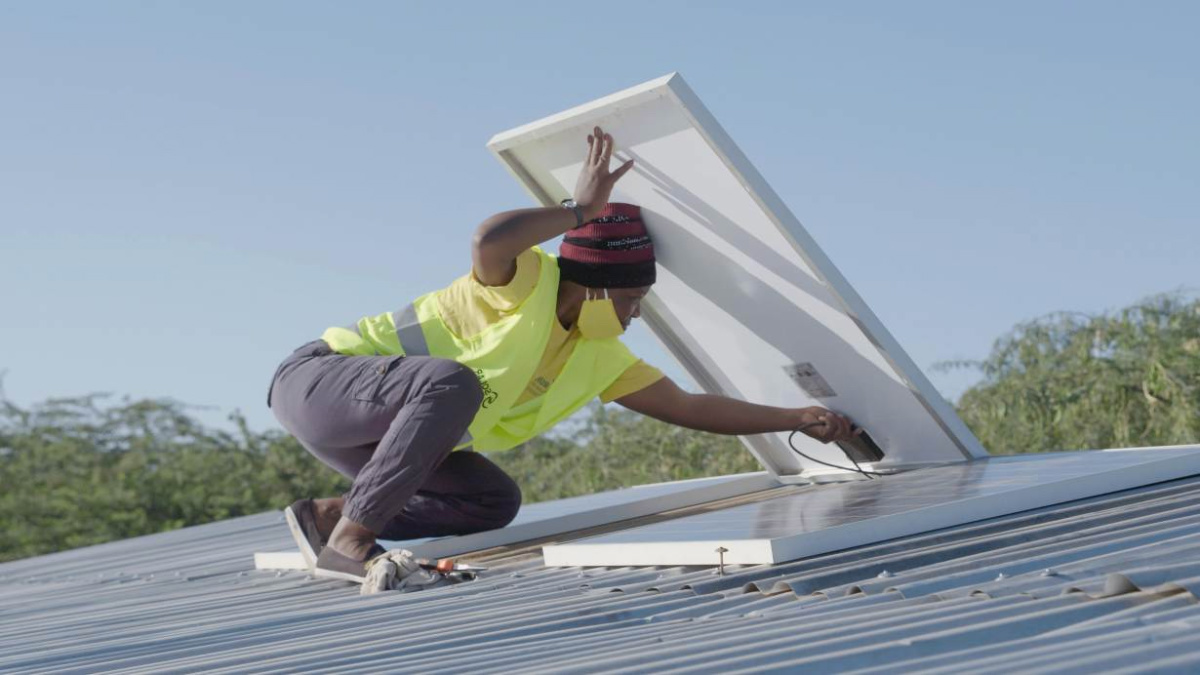 A woman solar installer trained through the “Each One Teach One” program works with panels on the roof of a building in Kenya. PICTURE: Ashden

A woman at a Kenyan health clinic ordered one of the $US400 units, which can be paid off in installments using the country’s M-Pesa mobile-phone-based payment system, then introduced Kisilu to five more buyers.

Now he has sold 120 of the coolers, which also come with USB ports to charge mobile phones and a set of rechargeable solar lights.

Kisilu said the cooling units increasingly were being turned to uses he’d never imagined, including storing breast milk for lactating mothers at Kakuma camp in northern Kenya, so they could work during the day while others watched their babies.

He’s had inquiries as well from coastal fishing communities as far away as Somalia, looking to keep their fish fresh, and agricultural exporters from Nigeria.

While setting up the solar coolers, Kisilu noticed young people crowding around to watch – and began thinking about how jobs for young people and skilled workers to scale up solar expansion in Africa were both in short supply.

That led him to launch “Each One Teach One”, a peer-to-peer learning programme that aims to expand solar energy skills among the young, particularly women, who make up 60 per cent of those trained so far.

“Getting on top of a roof [to install solar panels] is considered a man’s job. Women haven’t really embraced that type of job,” he said. “But renewable energy is coming very fast and we really need more people in it.” 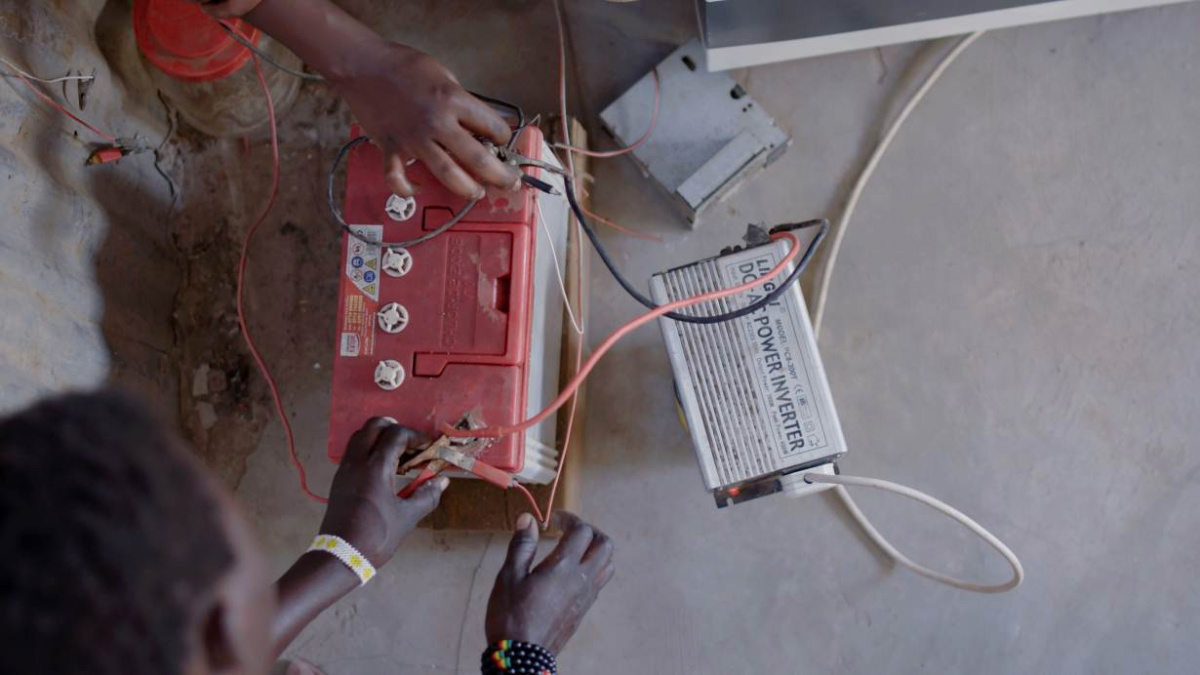 Dysmus Kisilu and a customer adjust wiring on a battery backup system for a solar-powere cooler in Kenya. PICTURE: Ashden

So far, about 100 youth – including at Kakuma refugee camp – have gone through a four-month solar skills training program Kisilu set up with a Kenyan technical university, and have learned to install and maintain solar equipment.

“The idea is every person you’ve trained can become an evangelist,” he said. “When one young person has a job in a new field, it becomes more appealing for others to be inclined to it.”

Slowly, Kisilu’s cold-storage-for-farmers business – his original idea – is ramping up as well.

With his grandmother’s help in introducing him to women’s farm cooperatives, about 3,000 farmers are now using the service regularly, and Kisilu’s company is finally breaking even and even achieving “a bit of a profit”, he said.

He hopes to franchise the coolers, and is working with the Massachusetts Institute of Technology and other institutions on changes – such as more use of evaporative cooling – that would bring down prices for solar-powered chillers.

“There were really frustrating years, and I was really doubting at some points,” he said. But “there’s light at the end of the tunnel now”.