The following is from Election Watch, a segment of the Africa Insiders Newsletter. Election Watch follows every election and vote in Africa. It gives key background and reading in the run-up to elections and follows the results and outcomes in the weeks after. 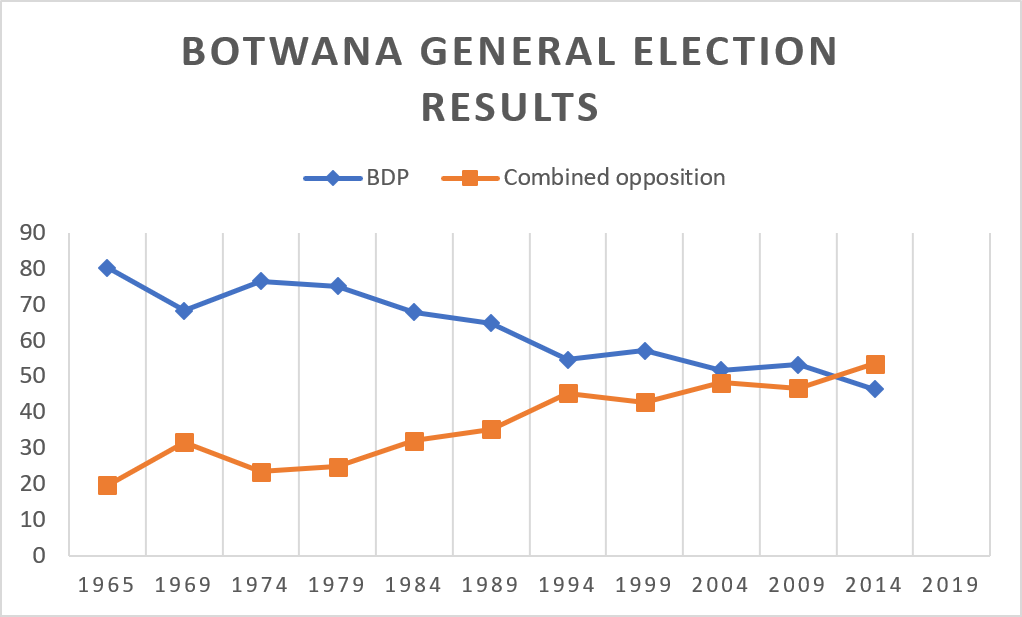 The vote share of the ruling BDP vs. the combined opposition in elections since 1965.

Pay what you want for the FULL Africa Insiders Newsletter!

This is a free segment of Election Watch, which is part of the Africa Insiders newsletter.

To get the full Election Watch and Africa Insiders newsletters, email [email protected], telling us the price you’d like to pay.

Yes, you decide the price as long as it’s at least $2 per month to cover the transaction costs.

If you are unsure what to pay, we recommend $10, but it’s up to you and we won’t judge. If you give more ($15/month, $50/month, $100/month!), your extra donation above $10 will go into a special fund for AfricanArguments.org to commission in-depth articles by African writers and journalists that will be free to read for everyone.

Again, just email [email protected] and let us know any amount of $2 or more and you’ll get the Full Africa Insiders Newsletter for the price that feels right to YOU!

The Africa Insiders’ Newsletter is a collaboration between AfricanArguments.org and @PeterDoerrie, with contributions from @_andrew_green and @Shollytupe and assistance from Stella Nantongo. Part of the subscription revenue is funding in-depth and freely accessible reporting and analysis on African Arguments.

Podcast: From Below, New Youth Politics in Africa