“Give a small man a big gun,” said the ambassador, “and he will prove he is a small man”.

I was reminded of this aphorism in navigating 11 checkpoints on the 145km northwest from Addis Ababa to the civil war’s front just beyond the Amharic city of Debre Berhan. At each one we were stopped by a man with a gun, sometimes Oromia or Amhara militia, depending on whose territory the section of road criss-crossed, sometimes local or federal police, and a couple of times, by a mixed group of Ethiopian National Defense Force (ENDF) soldiers and plainclothes intelligence officers.

It was the latter, just outside the town of Debre Sina, that gave us the hardest time.

The war is marching closer to Addis at a fair lick. Just 10 days earlier, with the fall of the city of Dessie, the front was 300km from Addis. There was little evidence from our route of a government plan to stop the advance by the rebel Tigray Defense Forces (TDF). All the signs are, so far, that — surprise, surprise — the TDF has simply gone around most ENDF positions and continued virtually unabated on its mission to unseat the government of Prime Minister Abiy Ahmed.

Addis abounds with stories about Turkish and Iranian drones, and Israeli and Chinese weapons. There is talk about new arms imports which are going to turn the tide in the favour of the government.

But the only technology seen on our road-trip was the AK-47, a hotch-potch variety of generally badly fitting uniforms, the ubiquitous Toyota Land Cruiser (Africa’s war technology of choice) with young men hanging manically on to RPD machine guns propped on their roofs, and a new development: the mud-smeared white pickup, the latest in washable camouflage patterning. No heavy weaponry, no helicopters, no artillery, no prepared emplacements beyond ropes across the highway, not even on the run-up to Debre Sina, 10km from the latest fighting, and the most likely defensive position before the run into Addis itself. 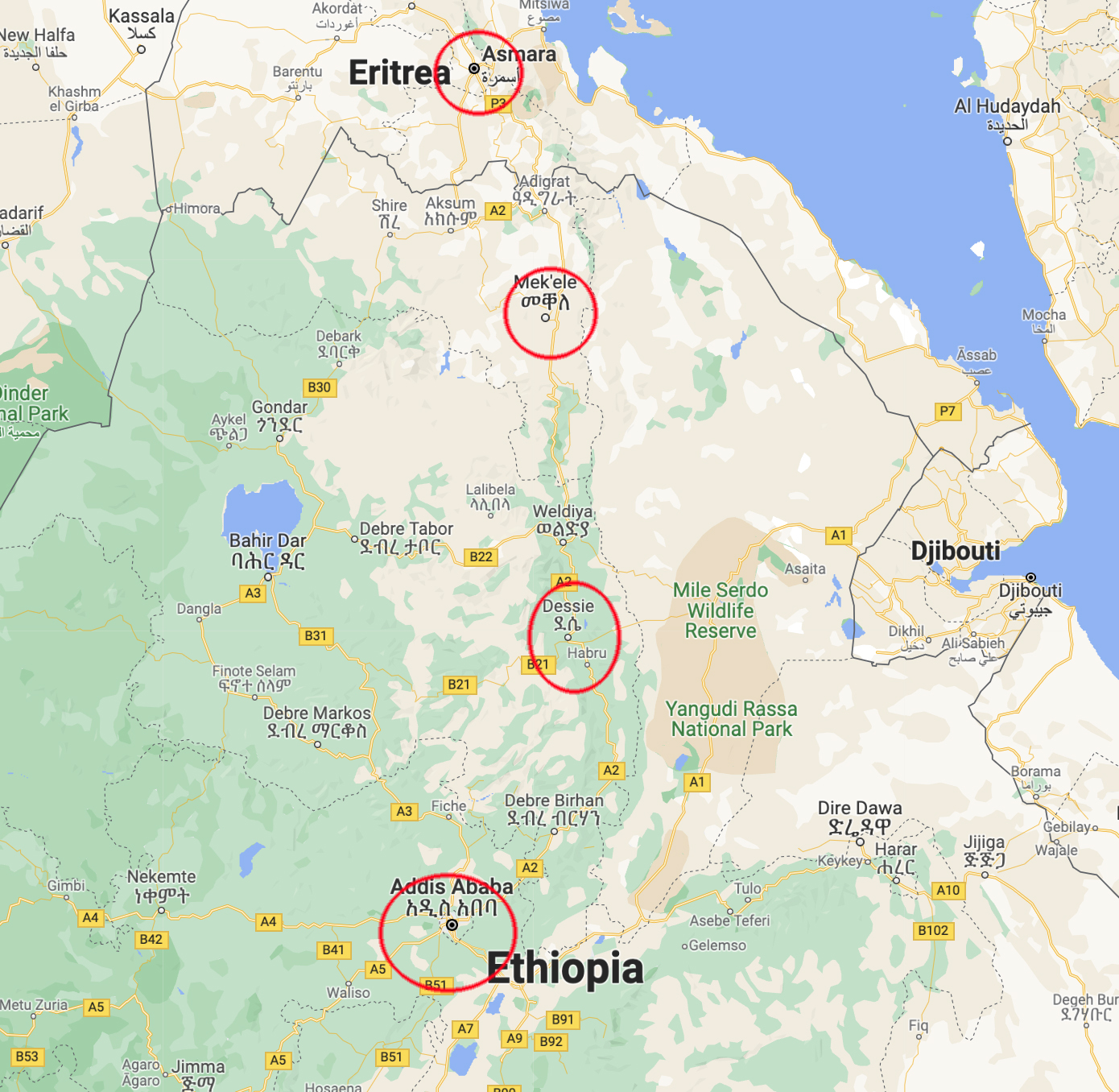 At every checkpoint, we were asked for our identity documents, and the reason for our travel. My two companions had recently done the route several times in consular support of their nationals.

It made for slow going, the 280km round trip taking 7½ hours, including one checkpoint on entry to Addis where we queued for 90 minutes, only to shuffle on to the last one where we experienced, again, the full treatment: out of the car, frisked and all bags searched. (I did consider offering a copy of my latest book to boost sales, but then thought better of it.)

Abiy’s plan, if there is one, is to continue his belligerent rhetoric imploring sacrifice (of others) in the name of an uncertain vision which seems to be based around not returning the country to the type of rule of former Prime Minister Meles Zenawi, a Tigrayan, who died in 2012 after nearly 20 years in charge, during which time the TPLF gained a disproportionate share of political power and economic opportunities.

Addis’ analysts are also agog at how quickly the ENDF has collapsed. Like the Taliban advance towards Kabul, the TDF has, just as it did 30 years ago in ending the rule of Mengistu Haile Mariam in 1991, outperformed Abiy’s troops on the battlefield and, especially, in the media.

The ENDF is seemingly a spent force.

It is surprising that Abiy, a former military officer, does not have a particularly workable plan for war. Muddy camouflage won’t wash it. But then again, the prime minister is famous for his self-belief.

This may also help to explain why, for all of the help and willingness of outsiders from the African Union to conflict resolution experts, Abiy lacks a plan for peace. Never mind that he received the Nobel Peace Prize in 2018. He is not the first mistake the Nobel committee has made and probably, on that committee’s seeming inability for self-reflection, won’t be the last.

Abiy first totally pissed off the Tigrayans in rolling back to the Meles years, a fall-out which he might have survived given that they amount to just 6% of the population, had he not done the same to the Oromia (over a third of the population) and then upped the stakes by siding with Amharic nationalists, who are essentially against nearly everyone else. He also managed to upset the Sudanese and Egypt over the Grand Ethiopian Renaissance Dam, and then trumped it all by relying on arch-enemy Eritrea to slap the Tigrayans down militarily in November last year. He then rubbed salt into ethnic wounds by dispossessing and detaining Tigrayans in a bout of ethnic business-cleansing in Addis, and in locking up the Oromia leadership.

In fact, if anything, Dr Abiy (he, remarkably, has a doctorate from the Institute for Peace and Security Studies in Addis) has stepped into all the imaginable potholes present in a peace-making process — holding unrealistic objectives, resorting to belligerent rhetoric, running interference to ensure a staccato rather than a constant peace process, mediation “shopping”, working against rather than with the grain of international actors, and openly failing to see his opponent’s position, strengths and weaknesses and acting on them. All of this is fine, of course, if the objective is to buy time; which is useful only if there is time to buy for a winnable war-fighting strategy.

At Debre Sina, the single-lane A2 climbs to over 3,000m through several small tunnels, to an escarpment that looks over the town of Shewa Robit, where fighting had erupted the morning of our journey. A larger concentration of military and militia barred our further progress, and despite our protestations, we were ordered to turn around. Once we had done so, we were immediately stopped again for questioning by a member of the National Intelligence Service and told to follow him and a hapless policeman to Debre Berhan where we were detained for further interrogation. My colleagues explained that we were searching for one of their citizens, “Sergio”, working for an international NGO, who had gone missing.

Eventually they tired of us — there was a war to fight after all — and having snapped all our IDs on their phones, and openly wondering what the hell a South African was doing among this lot, let us go back to Addis. They were, at best, a little twitchy.

In the first, the international community gets behind an African peace deal, enabled by Abiy taking immediate symbolic de-escalatory steps, including opening humanitarian access to Tigray, turning back on telecoms, banking and electricity services to the province, and speaking out publicly against Eritrean occupation.

This might, in a long shot, halt the war, but it is unlikely to save Abiy. It is difficult to negotiate from a position of weakness.

In the second scenario, suddenly bolstered by fresh international weaponry, the ENDF performs a miracle, and holds on, stopping the TDF and its allies from coming into Addis, the stalemate being followed up, in a positive outcome, by a peace process and a final settlement through a national dialogue.

More likely such a stalemate links to a third scenario, in which the Eritreans distract the TDF’s advance by re-invading Tigray, forcing the TDF’s retreat back up the road to defend their homeland to Ethiopia’s north. This TDF reaction is not certain, however. Rather Asmara’s further involvement might cause them to launch an all-out no holds barred offensive on Addis, perhaps expedited by closer collaboration with the Oromo Liberation Army.

Any further Eritrean intervention, whatever the short-term military consequences, will almost certainly lead to greater longer-term inter-communal violence and possibly even the dissolution of today’s modern version of the Ethiopian state.

If the Eritreans step in, what happens?

There is evidence to suggest that its president, Isaias Afwerki, has good reason to fear the reaction of his own generals to what will be an inevitably brutally bloody and possibly politically fatal struggle as much as the increasing international opprobrium that would surely result. This leads to a fourth, final scenario, that Addis falls, and probably sooner rather than later.

The question is, what then? The Tigrayans will, if they are as smart as they profess to be, not seek to return to the past, save taking back their businesses, but will set about creating a national dialogue that will enable power-sharing with legitimate Oromia and other leadership, and a fairer distribution of resources. Any failure to take this mature approach can only seed yet another conflict.

The ball is still in Abiy’s court, but only just. DM

Dr Mills, who has been testing the limits of his marriage in Ethiopia for The Brenthurst Foundation, is the author most recently of Expensive Poverty: Why Aid Fails and How it Can Work (Pan Macmillan) and the forthcoming (with David Kilcullen) The Ledger: Accounting for Failure in Afghanistan (Hurst/OUP).

Four scenarios and the funeral(s): Ethiopian powder keg… on AFRICNEWS